Another factor of modern life that promotes these diseases is that of non-compliance with biological rhythms.

On the site The ConversationAnouk Charlot and Joffrey Zoll of the University of Strasbourg describe the importance for metabolic health of matching lifestyle habits with circadian rhythms.

Circadian rhythms are cyclical variations of about 24 hours. They are directed by an internal “clock”, whose cerebral operator is located in the hypothalamus, some nuclei of which are rich in neurons whose electrical activity oscillates over 24 hours and is controlled by the cyclic activation of genes called “genes clock” or “circadian genes”.

The circadian clock is permanently resynchronized thanks to external regulating agents, such as temperature or food intake… but above all light.

The hormones that punctuate the day

The secretion of melatonin is synchronized with the day-night cycle: it begins when the light decreases in intensity, around 9-10 p.m. in summer, and reaches its peak of secretion in the middle of the night, between 3 and 4 a.m. am; it then decreases until the moment the sun rises.

With the return of light, melatonin ceases to be produced and another hormone, cortisol, takes over. This “stress hormone” prepares the body for increased energy demand during the activity phase. Its production is directly linked to the disappearance of melatonin, the mere presence of which inhibits the secretion of cortisol, which synchronizes it with daylight.

The 24-hour cycle is accompanied by the production of other hormones, in addition to the melatonin-cortisol duo: 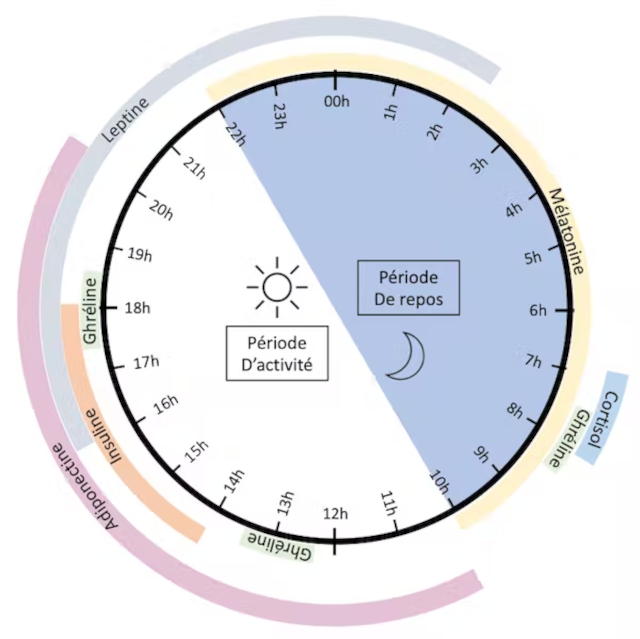 When to eat to be in tune with our circadian rhythms?

“If we refer to the oscillations of hormones during the day, we can hypothesize that we should start the day with breakfast around 8 a.m., after the cortisol peak, when our activity phase begins. . And we should no longer eat after the insulin peak, in the early evening, since this hormone promotes storage in the form of adipose tissue.

In addition, the insulin peak is followed soon after by the satiety hormone (leptin) peak, which suggests a signal to stop food consumption.

Thus, it seems more consistent to eat in the morning until late afternoon, when we produce hormones involved in the use of energy substrates, rather than after 7 p.m. when we are more likely to produce them. store as reserves. »

Another point to consider should be seasonal variations. The duration of melatonin secretion is longer in winter since the days are shorter, and shorter in summer. In theory, we should also adapt our meals to these variations in our environment, to best be in tune with our biological clock.

The risks of shifting

“Numerous scientific studies have shown that living out of step with circadian rhythms, in particular by eating late at night, or by shifting the rhythm of sleep, increases the risk of developing cardiovascular diseases, obesity or type 2 diabetes.»

How to be “on time” with your internal clock? 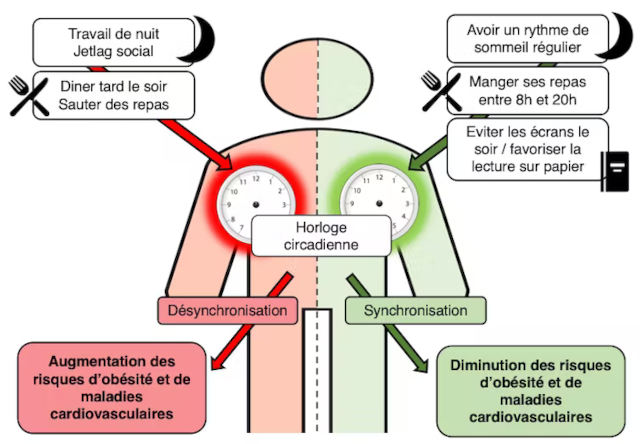 To be in harmony with its internal clock, the authors give the following advice.

Article in The Conversation: Better respect your internal clock for better health

For more information, see the links below.

Psychomedia with source: The Conversation.
All rights reserved.

Amandine Petit criticized for her physique during the Dancing with the Stars final: the former Miss France responds to her detractors